Screen mirroring on a transatlantic call.

It was six hours before our clocks hit midnight but I never saw so many fireworks!

Here’s to the new year.

I had a nice birthday and finished up the day watching fireworks from the front porch. Right across the street, shot from the baseball field. A beautiful summer night with lightning bugs too.

A short video of fireworks across the street.

The evening felt like summer, this last night of September. Steve and I had a great time thanks to my son sharing his season tickets with us. The city skyline so colorful and bright against the dark sky.  It sure gets darker earlier and the game didn’t start until 8:15 so definitely Monday Night Football.

It was a good game for the Steelers as they were 0 and 3.

At halftime we saw the four inductees  of the class of 2019 being inducted into the Pittsburgh Hall of Honor — Elbie Nickel (his son was there to represent his deceased father) , Larry Brown, Bill Cowher and Hines Ward.  #86 got the loudest cheers.

A sliver of a new moon in the sky

A bronze tribute to Franco Harris and the Immaculate Reception .

A favorite parking garage is being demolished.

END_OF_DOCUMENT_TOKEN_TO_BE_REPLACED 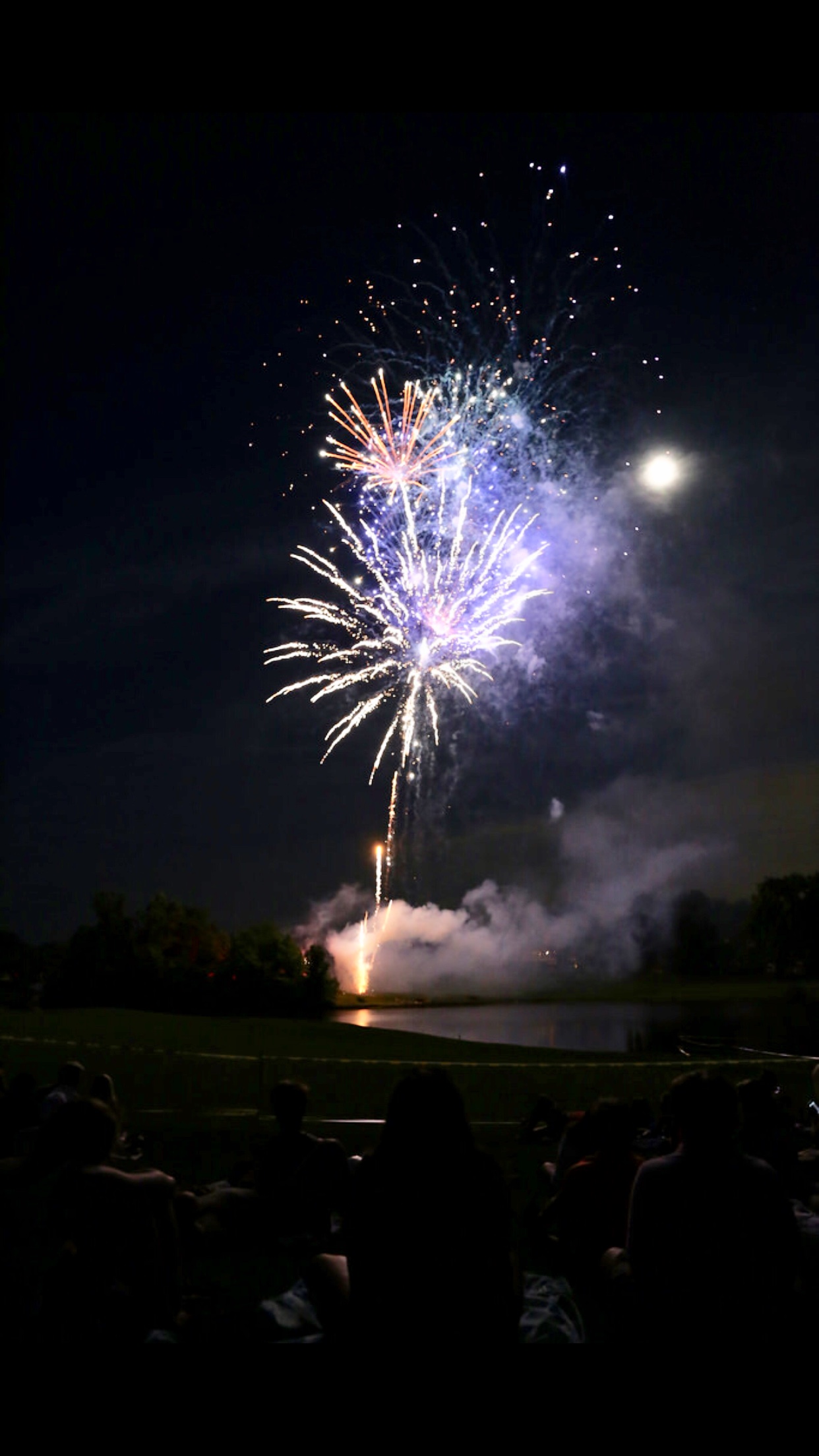 Yes, it’s the moon AND fireworks at the same time. Columbus Ohio with the family last week for the gigantic fireworks display. We had a nice evening together.

it’s the annual effort to improve my fireworks photography.

And I am celebrating another year with my Fourth of July birthday today.

Happy Birthday to me.

Steve and went down to the North Side Friday night. The Pirates game had started at 7:00 but we went to dinner at Atria’s watching the game against St. Louis Cardinals on the TV and then we walked around, did some serious people watching and checked the score on my phone. St, Louis won the game 4-3.

A couple of dedicated Pirates fans who let me take a photo of them sporting their Pirates Parrot Hats.

The Barges on the Allegheny River from where the fireworks were launched.

Still working on getting the best night  shot of Bill Mazeroski statue.

A dot of moon on the right.

When we pulled up to the stop sign, we saw Kennywood  Fireworks at seemingly eye level because their street is up so high.

It’s been a fun week of colorful collages.

Once I got started it was hard to stop.

A lot of response was generated by the different colors and it’s made me see the trend in my photography, color wise, what I’m drawn to….besides the human element.  The clothes we choose, our dishes, the bed linens and artwork which surround us in our lives. Many have commented on which color is their favorite.

Good to be alive at sixty-five.

Happy Medicare card to me.  I can get that free bus pass now.

My sister and I are in Columbus OH on the big birthday eve after our family gatherings and driving over 1700 miles.

Laura and James hosting a July 4th birthday celebration for me tomorrow.

Here’s a photo collage with some of my favorite things- my family, pignoli, fireworks, coffee ice cream, raspberries, Zeke’s coffee, reading books,  teapots, knitting and sock monkeys. Oh yes, a few shots of me throughout the years.

After the baseball game, the Zambelli family Fireworks were beautiful.

We crossed the Roberto Clemente Bridge

The Furries are in the Burgh