I know this absurd fact because my friend Joanne sent me her daily Pandemic Painting and told me so! She and her sisters paint daily for two years now but I’ll do a separate post about their prompts and the paintings they create and share with one another.

My sister Mary my daughter Laura and my grandson Charles and I have been to The Sock Monkey Museum in Rockford, Illinois . (Mary and I went another time, too). here’s one post from that exhibit

I’ve sewn a lot of sock monkeys. Here are two.

https://rutheh.com/2018/01/06/the-sock-monkey-book/ a book I illustrated about how to make a sock monkey

Tuesday morning I drove out to Columbus to visit the family.(ies) Halloween I’ll split my time between both families so I can photograph everyone in their costumes. We won’t let the predicted rain prevent the photography.

Here’s what I found when I arrived.

And all her knitting projects and yarn AND a jumbo size box of Cheez-its. Mmmmmm. My favorites. (No judgment please)

My grandma name is Froo Froo Ruthie thanks to Anna now 15.

Thanks Maura for the festive welcome. Love that you created this happy scene for me to find upon my arrival. Xxoo❤️❤️❤️

I’ve been to Harmony, Pennsylvania but not Harmony, Maine. Recently I watched a Kristy Glass Knits knitting video where she told about Bartlett Yarn Woolen Mills (since 1821) manufacturing yarn.

The man on the video featuring Hudson Valley Sheep and Wool said, “Bartlett is a mainstay for us. This is your grandma’s yarn. This is real true farm yarn.  Or your great grandmother’s yarn.  At Christmas, a lot of people buy it to make stockings .”   Well, I’m getting a head start this year. My friend Deb has been knitting Christmas stockings and inspired me to knit them for my grandchildren.  You might remember her gauge difficulties with her Christmas stocking- I blogged it last January.

The grandmother who taught me to knit was born 126 years ago on February 7th.

That very day, I got on the phone and spoke with a nice woman and told her what I wanted to knit.  Three days later I got a box of yarn from Harmony, Maine. She helped me select Spruce Heather, Cranberry and Natural.  I added the other heather to create sock monkeys on the stockings, which I graphed. Mark’s old stocking from childhood served as a guide and I found a vintage knitting pattern  from the 60’s on Etsy to serve as a template for the actual stocking.  The woman who knit Mark’s stocking in Clarion PA was named Jane.  My plan is to knit one a month and have them ready for NEXT Christmas. For the grandchildren.  Getting an early start this year.  And yes I did finish James’ sweater and he loves it!

Already I realize my monkey is a bit too tall.  Back to the drawing board.

From a photography assignment years ago. 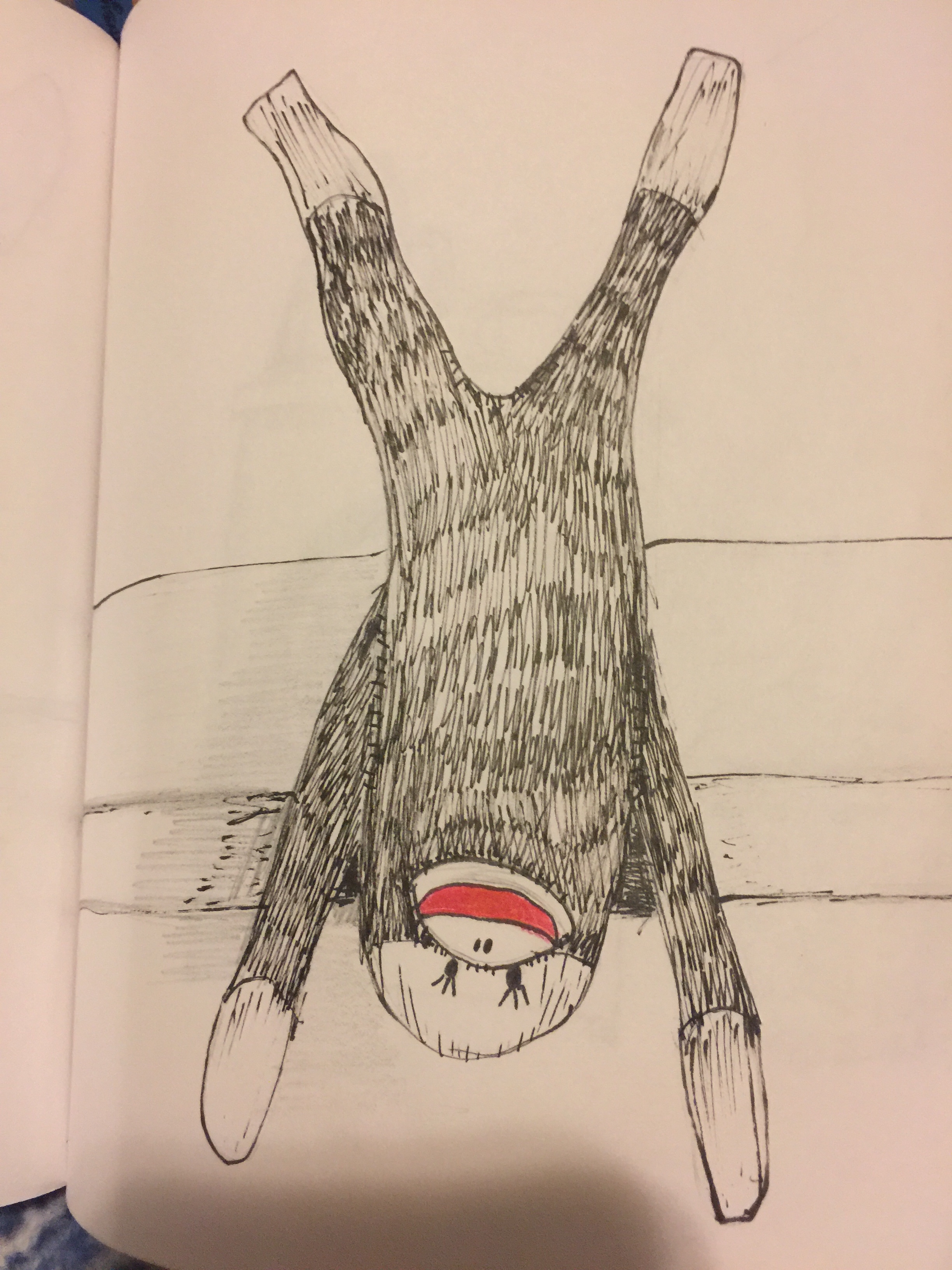 Some of you’ve seen the little sock monkey I keep on my camera lens. He stretches around the cylinder, a gutted Beanie Baby. I’ve got a sweet spot for them.

Eleven years ago I made this Sock Monkey Book for granddaughter Anna(14 now). I found it on a shelf while re-shelving some children’s books at Mark and Erika’s. Finding some books to pass on to the younger grandchildren. Not sure if these blank Little Golden Books are still available but it was fun to make.

I’ve sewn a lot of sock monkeys over the years. This book tells the story of transforming a pair of Rockford Socks into a lovable toy.

The finished sock monkey joins the other toys.

Maura has two of her parents old stuffed animals. The sock monkey, in need of repair, I sewed for Mark in 1976 and the brown teddy bear is Erika’s childhood bear. It’s hard to throw away things with a face. They are definitely loved and cared for by their daughter now.

Do you have any old stuffed animals in your house?

And Scandinavian. At the Stockholm Inn- Rockford,  Illinois. We were there just last week for breakfast.  I had the Swedish pancakes and Charlie liked visiting the gift shop and Sock Monkeys.

Note: have to work on the stuffing so it isn’t lumpy

To Do: hand sewing and face embroidery by daylight tomorrow.

My sister sent me this photo she took with her phone.

A little sock  monkey, from the lost toy  basket.

You know how I feel about sock monkeys.

Thanks Mary
And here are a few sock monkey pics from old blog posts.  Just last December we went to the sock monkey museum in Rockford,  Illinois

It’s been awhile since I’ve stitched up a sock monkey. The classic.

One for new baby grandson in Ohio and one for a friend of my sister in New York City.  The pairs of socks have been in the house a long time. Once I stitched on the faces, they seem to look at me and smile.

Both Anna and Jack have set up a crew of sock monkeys, told them to smile and photographed them. This evening I placed the newly completed monkeys on the couch in my living room. And took their picture

One of the smiles needs a bit of straightening out, I see upon examining the image.  Ooops.

And yes, my sister and I visited the Sock Monkey Museum in Rockford, Illinois when we were visiting relatives.  (The relatives live in Rockford, not the museum)

Here are some old sock monkey photos from previous blogs.

Anna entertains her siblings in the kitchen

The grandkids greeted me

Anna and her giant monkey

Jack with his sock monkey tie

I knit the colorful boa

I gutted a Beanie Baby for my camera lens

When I was a kid (c. 1958)my family lived in the city of Newark NJ. there was a Youth Consultation Service behind our house on Broad Street.  At least a dozen girls lived there and each girl had a handmade sock monkey.  My mom thought sock monkeys weren’t appealing but I always wanted one. Some people think they are ugly, others think they’re cute. These two have a bit of scrap flannel from the sock monkey pillowcases I stitched for the grandchildren for Christmas.  Going with a theme, here. That will be another post.

The first sock monkey I ever made was for my son Mark (39),father to the grandchildren in the photos above. He name it the Doonie Monkey and it was stuffed with old stockings.  I use fiberfill now. And for some unknown reason, I never added a tail on his monkey.  He resides with the grandchildren in Ohio, too.
I’ve make pink and blue and purple monkeys but my favorite is the classic.

If you would like to make a sock monkey, there’s a terrific youtube tutorial by Professor Pincushion on how to make the classic monkey. I don’t add the ears or buttons on mine.