I’m getting the ingredients tomorrow

Do you like cooked fresh cranberry sauce or raw relish? Or neither? Or both? Or the slices of  Cranberry Jelly from a can?

The annual making of the cranberry-orange relish. I don’t make this any other time of year.I’ve heard lots of different renditions of cranberries and everyone has their favorite.  My mother used to use a metal meat grinder and screw it onto a table or chair with a woven potholder to keep the wood from being marred. Her recipe was strictly cranberries and navel orange.  I add a Granny Smith and today a HoneyCrisp as well. I used to have one of those grinders and ground relish with Mark when he was a boy in the same manner as my mother.  My friend J from Omaha gave me her MagiMix French Processor when she got a Cuisinart.  That was more than 25 years ago and it still works. It has a European plug so I have to keep a little extra piece to plug it in.  So two bags of cranberries, washed and drained, two oranges, two apples(peel on) 1 3/4 C sugar.

That is all there is to it. Refreshing and tart and sweet simultaneously.  And thanks to Susan K for the Turkey towels.  Very festive.

Happy Thanksgiving.  I will put the bowl in a cardboard box so it doesn’t spill and drive to dinner at the other Grandma’s.

Q: How many seeds does a teacher plant in a lifetime?

A: Too many to count.

That lone seed looks like it is floating to me!

There are lots of teacher gifts with apples and seeds and sweet sayings but I was thinking about how often a teacher sees the fruit of one’s labors from the years of teaching in the classroom.

A few days ago I posted Erika and two of the grandkids walking in the apple orchard.

Then Steve’s art on the mantel with the Granny Smith apple.

Just for fun I did a google search – Apple and rutheh. Quite a few photos of apples or some form of apples appeared in the results.  Many apple photos  over the years of blogging. Some other fruit appeared and even some tomatoes as I scrolled down.  Here are a few examples of apple photos from previous posts.

There is the Before they Get to the Store post showing how Honey Crisps are grown in Washington.

Like a science experiment.  Drastic temperature change.       Anna (5) said “Get your camera and take a picture. You could win a prize!”

So this is what it looks like when “the bottom falls out”!

Cider making in North Carolina in the first photo and a Cider Press in Pennsylvania in second.

There is a guest blog from Wildflour Bakery in Alaska

My sister in law’s Apple Pie in Washington 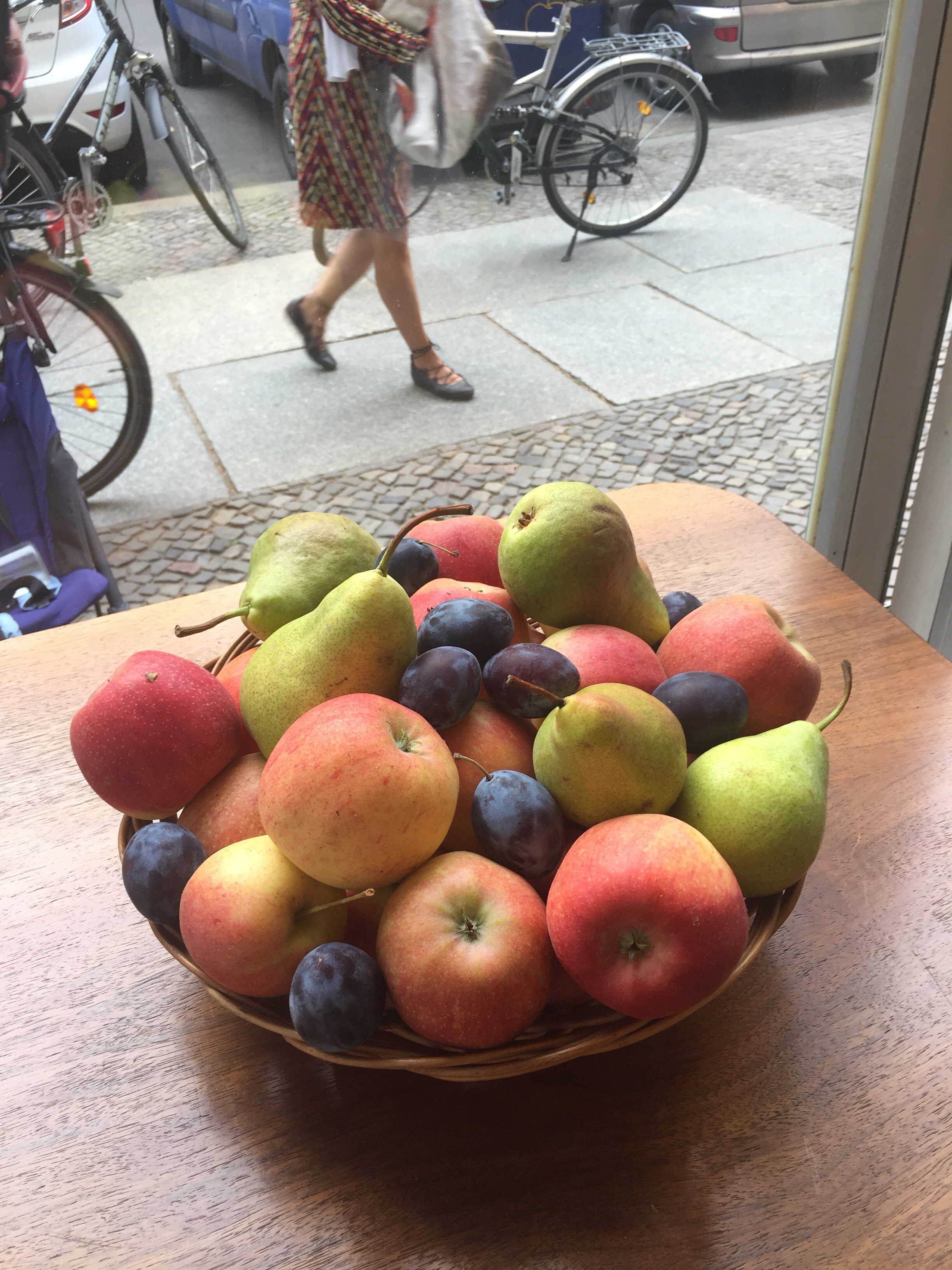 In addition to ice cream, I love to eat fruit. I know there are people who do not. This fruit bowl was so inviting. Bought three kinds of apples after sampling each and also the golden Mirabellen.

Apple parked downtown. Found on Penn Avenue at 13th Street, around the corner from the Heinz History Center.

Apple Nut Torte served on a piece of slate at Kochhaus in Schoenberg, Berlin. I asked if there were a cookbook for sale with the recipe and unfortunately there was not.

Three photos-variations on Fruit- pastries, a bowlful and a single red apple.

Mark brought a pastry box filled with “fruits” from Mozart’s Austrian Cafe down on High Street in Columbus. The peach had marzipan inside. I checked out their menu and plan to get a piece of apple strudel before I return to Pittsburgh. Their dessert descriptions are enticing. You can eat in their restaurant, too. Piano bar.

A traditional Hungarian torte, the Esterhazy is made from individually baked layers of flourless almond meringue filled with a rum-infused almond buttercream, and decorated with a distinct chocolate striped pattern.  7″, $35, Decorated $40

And at Mark and Erika’s home, on the same kitchen counter as the pastries sat a large wooden bowl filled with fresh fruit.

I chose one to wash and cut up into slices.