This recipe is from a woman named Becky in 1980.  It has been a family favorite since then.  Somewhere I have the original recipe card.

In a large bowl mix together:

2  10 oz packages Frozen Chopped Spinach, thawed, drained and squeeze out as much water as possible

1  16 ounce container Cottage Cheese, (I like the small curd)

Salt and Pepper to taste. The cheese is salty to me so I don’t add much salt.

Pour into the buttered pie plate.  Bake for 45 minutes or until knife in center comes out clean.

Let rest a bit before slicing so the wedge holds shape nicely.

No meat was involved.

Take 3 zucchini and grate or use food processor. Tip bowl to let moisture run off and discard. Get zucchini as dry as you can.

and about 3/4 c Italian Bread crumbs. Add a minced garlic clove or two

A couple of yellow squash and a zucchini sautéed in olive oil with onion and garlic- sprinkled with fresh Parmesan on top of a bed of arugula and pasta.  Olives, sliced tomatoes with fresh mozzarella on the side .

The tastes of summer.

Chef Sam cooks a Lentil Cheeseburger recipe with a Roasted Red Pepper sauce and prepares a Caesar Salad during Cooking Class. He told how he sterilized the eggs for the dressing, gently lowering them into boiling water for five minutes. Safety was emphasized.  Lentils, mushrooms, beets, carrot, onions and garlic were a few of the main ingredients.  Miso paste helped hold it together.  There were ten participants and we all enjoyed the delicious meal at the end of the class.

The class was held Wednesday afternoon at The Stephen Foster Community Center on 286 Main Street, located next to the Lawrenceville Branch of the Carnegie Library. The center is housed in an 1865 brick building now on the National Historic Register. The center offers fitness classes such as Cardio Strength and Flexibility, Tai Chi, Yoga, Soul Line Dancing, and Practical Meditation in addition to craft and  other recreational activities.

Thank you Chef Sam for a great class and delicious meal.

Allegheny County senior citizens can eat lunch for a modest donation of a dollar but should register by calling the Community Center office by noon the day before at 412-350-5460.   Contact Allegheny County Seniorline 412-350-5460 for eligibility, if you need a Home Delivered Meal. 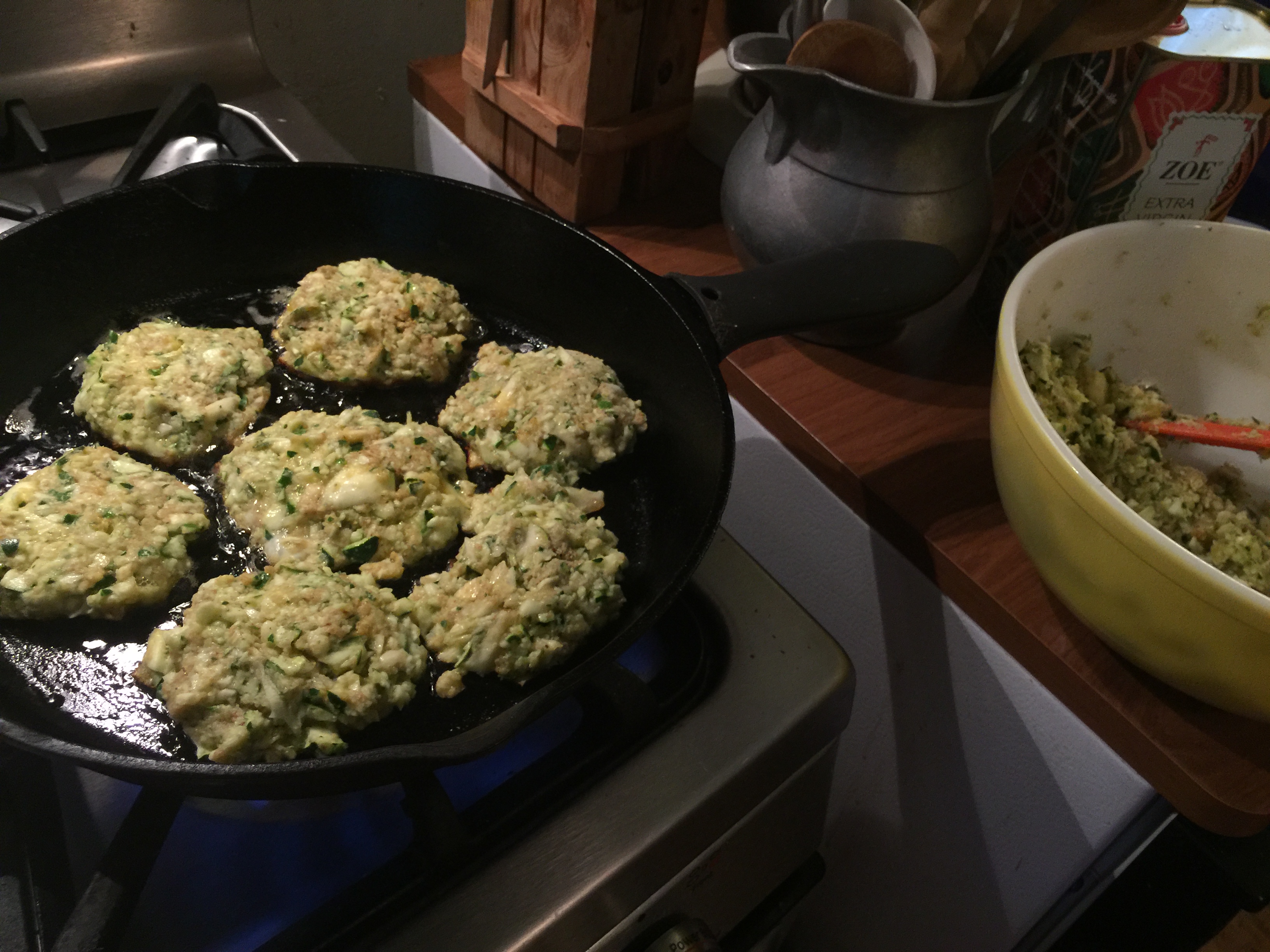 Tonight I added fresh grape cherry tomato sauce on the side.  Grate some Parmesan

All come together in this recipe-

I love zucchini but this recipe is my favorite. It’s  from my next door neighbor in Clarion PA. (C.1980)

The key to success is getting as much moisture out as you can -which is a challenge. And I like using the cast iron skillet.

Tilt the bowl for a time to capture the wet. Drain off. Squeeze as dry as you can.

Add egg, dried Italian bread crumbs or plain with your own seasoning, salt and pepper. Toss with fork -add minced garlic. Mmmmmm can smell them now.  Shape like potato pancakes not too big. My gluten-free friend used crushed Rice Chex instead of bread crumbs.  Drain on paper towel.

You can eat them plain (my choice) or add to marinara sauce over pasta.

LOriginally posted four years ago- May 2011- a REBLOG although you might not want to fire up your oven in the summer heat right now. Guess I have a taste for it tonight.

Some blog readers say they just look at my picture of the day and don’t bother reading what I write. They are “visual”.

The saying that a picture is worth a thousand words is debatable some days.   The number varies.  On Thursday, a freshly pressed blogger suggested using photos you find on blogs to inspire writing and mentioned my blog as a resource which was flattering.  I love the idea of my photos being a writing prompt.

The New York City sidewalk image of the pizza box and the pair of shoes was a recent example that triggered some one-sentence short story writing!

Today’s post is experimenting with a new feature- distraction free writing- initiated by smart people at wordpress.com.  I’m checking it out even if everyone stopping by is just looking at the photo of the day!

This baked pasta recipe was in the newspaper more than four years ago and I have been making it ever since.  I haven’t looked at the recipe in a long time but decided to search my email and the year 2007 came up.   I also discovered the author of the recipe was Jamie Oliver. Four years ago I didn’t even know who Jamie Oliver was.  Since it is his recipe I will send you to Jamie Oliver’s Recipe

My mother always said to buy the best ingredients and do as little to them as possible.  The best ingredients you need are fresh mozzarella cheese, fresh basil, extra virgin olive oil and Parmigiano–Reggiano cheese (no green-can-shaker-cheese!).

You can make the sauce in about twenty minutes and use the best quality San Marzano tomatoes just as he suggests.  I’ve made it with fresh tomatoes, too.

This photograph was taken in my daughter-in-law’s (and son’s) kitchen.  My son says don’t call the pasta “little ears” (orecchiette) as it grosses him out. “Call it pasta. Just plain pasta.”   The four grandchildren call it pizza noodles!

And if there are any leftovers, it tastes even better the next day.

*July 29, 2015 P.S. I have made it with gluten-free brown rice pasta and it tastes delicious. Some shapes hold better than others but the same delicious taste!  Promise!

A couple of the ingredients for the soup I made my daughter-in-law last weekend.

Carrots, celery, onion, garlic from Okanogan WA from my brother.   Peeled off a  couple of the outer leaves.

( iPhone 5 photographs.  Wondering if I need the 6)

Since we’re talking about meat…..

on the way home from school I stopped at DJ’s Butcher Block (Butcher Shop) on Penn Avenue.

What a selection of-

There is also Amish Butter and Organic Cheese, one item I bought today was from Mercer County.

DJ the proprietor is a also a chef,  trained at the Culinary Institute of America (I read in this Pgh CityPaper Article)

He knows what he is doing

for the vegetarian?    A couple of vegetarians were in front of me buying sausage today.

Someone else was picking up a custom order of braciole.

You can get a Savory Meat Pie to take home and bake.

I bought a pound of the grass fed ground beef and made burgers which were delicious, fried up in a cast iron skillet.

During Little Italy Days I had photographed DJ at night.  Thanks for allowing me to tour your butcher shop and photograph you again.